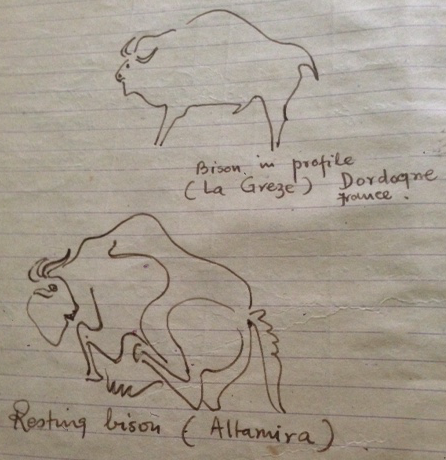 The researches about Lascaux cave in the region of Dordogne valley were completed in 1940.This cave was discovered by two school boys who went behind their dog into a hole where they found a big entrance to a cave. They reported about it to their class teacher Monsieur Lavel.He went with a lamp to the cave and found two passages leading to a big chamber. There were amazing studies of Deer, Cows, Bulls, Bison but the largest one is of one bull about 17 feet long. Drawing of a man was also found in it. The pigments used were black, yellow and Brown and Purple and some unfinished paintings are only in outline according to the crystals formed over the surface. The deduction of Research Scholars in that the cave belonged to the Aurignacian.Such paintings must have a long evolutionary period beginning from single outline .The symbols used in the cave are meaningless to us because they have not been deciphered if they had any meaning at all.

Though divided into different units the Greeks personified the nature Gods giving them human form. They thought Zeus as King of Gods ruling from the highest peak of mount Olympus. Uses the God of art and culture dwelling on the slopes of Mount Parnassus and Apollo the God of wisdom ruling from the mount Delphi because they gave the Gods the human form. The Greeks created perfect individual as an ideal .The classical history of Greece begins 776 BC with the establishment of Olympiad. Every fourth year the Athletic, games, literary and music contest were celebrated in the honor of Zeus on the plains of Olympia. This brought all the tribes of Greece together for the period of games, all hostilities stopped among them. This paved the path for Greek Art to reach the golden age of Pericles in 5ht century BC.Every four yearly gathering the worship of same Gods, assimilation of culture and the unity emphasized in spite of continual warfare and the interest in the perfect human body all led to the perfection of Hellenic Art. 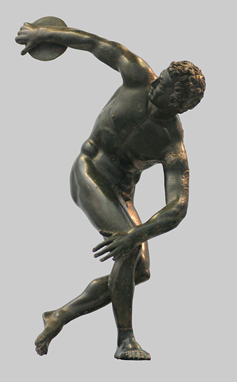 Golden age in Greece reached in the 5th century and then came the decline because Athens had swollen with pride and Athenians had become idle and lazy. Sparta gained power again and rebelled. Peloponnesian war followed and both the powers struggled for about 27 years from 431 BC to 404 BC.The Greek unity was broken and in the last Sparta came out victorious. Philip the second of Macedonia marched from North in 357 BC and won over Greece but before he could be recognized he was killed in 336 BC.

Alexander his son conquered Greece, Asia Minor, Egypt and Persia and marched up to North west of India. When he died at Babylon in 323 BC, his generals divided up the empire but Greek civilization had already spread far and wide. Alexandria at the mouth of River Nile had become the center of learning and the greatest library of manuscripts was established there. At last Greece was conquered by Romans in 146 BC.The Greek Artists were carried away to Rome and to satisfy the wishes of their masters, they copied Greek original pictures in great many numbers. Wall paintings in private and public buildings have perished and we can get an account of Greek painting only through the literary sources and the copies from Rome.

Polygnotus of 5th century BC was a painter as well as a sculptor who attempted to suggest depth by placing figures one upon other. Another famous painter belonging to the same century Appollodorus was famous as shadow maker who experimented with the use of shadows to make his figures appear round. Other painters who were famous artists according to the Greek stories were Zeuxis, Protogenes and Parrahasius.They were turning from idealism to realism and try to bring the likeness in the portrait of heroes and nobles while these Greek painters experimented in perspective, lights and shade and contours. Line seems to be the important means of expression because sculpture and painting ran side by side. We can have further knowledge about the changing trends in painting as they existed in sculpture. Greek artist liked to paint healthy bodies with graceful proportion and balance.

Myron portrayed fleeting moments of swift movement when the whole body on action reveals its athletic grace. Discobolus is his masterpiece sculpture.
Phildias brought sculpture to the climax; he made Athena at Acropolis that is 40 feet high and Zeus at Olympia that is 35 ft. in height. Thus we see Greek painting followed the same trends as were followed in sculpture from idealism to realism.