Civilization of Greece nearby islands in Aegean Sea and Crete is included under the broad term Aegean Civilization having its root in Egypt when divided into separate zones. The civilization of the main land (Greece) is termed as Helladic or Hellenic that of Islands, Cycladic and of Crete or Eretan and Minoan. The term Minoan looks as wrong though it is in common use. It is after the name of the great king Minos who ruled over Crete in about 1600 BC.Under him the civilization reached its zenith. It was developing before him and persisted after him, thus the history of Crete falls into three divisions.

During Minos time Cretan Civilization reached Mycenae, Tiryns the cities of Greece and Troy in Asia Minor. From 1350 to 1100 BC is also called Homenic age. Though Homer wrote the epic poem Iliad in about 850 BC.It was a period of conflicts and migrations and in about 1400 BC Greeks invaded Crete burnt the palace of Knossos and took complete possession of island in Aegean Sea up to 1100 BC.Gold and all precious material was taken to Greece. Everything breakable was broken and palace was burnt and all the craftsmen and artists were taken to Mycenae and Tiryns. Thus the civilization of Crete gave way to Helladic or Hellenic civilization that rose in Greece.

Homer's epic the 'Iliad' and other stories of Theseus, Minos and Minotaur were all considered as the legends. But Heinrich Schliemann a German scholar believed them as truth and historical facts. He was an advocate of the historical reality of places mentioned in the works of Homer. Schliemann was an archaeological excavator of Hissarlik, now presumed to be the site of Troy, along with the Mycenaean sites Mycenae and Tiryns.

He learnt from a schoolmaster about other legends also and guided by second century traveller Pausanias. When 19 years old he went to Hamburg then to Holland and served there for 17 years and amassed the good fortune. In 1868 AD he went to Dardanelles to excavate the city of Troy. First people laughed at him but he excavated cities upon cities and at last the Troy in 1873.Gathering such a big success he turned to Mycenae and found tomb full of treasures as Homer has stated in his epic poem. Other scholars and excavators got impetus and the Aegean Civilization came to light with its center in Crete and roots back in Egypt. But in Crete the excavation was impossible because it was under Turkish rule. When in 1898 Crete was free from Turkish regime Sir Arther Evens and Dr Habens took up the work in 1900.

Evans discovered the palaces of many kings including the great palace of King Minos at Knossos.Diadolos was the great builder of Labyrinth for Minotaur who was a bull headed demon and the dancing floor for Aviadne the daughter of the King. The legend says that the Theseus had come from Athens married Aviadne and slew the demon. Bull was thought to be sacred and the frescoes, reliefs, coins, potteries and plates all reveal that the people of Crete believed in the cult of the bull. People led luxurious life and bull sport was the center of entertainment. Historians are not sure whether it was a religion or sport. Excavation continued and the seals, picture, writings and other symbols that shows similarity with the 5th dynasty of Egypt about 3000 BC.

Knossos was a fortified city because the island of Crete was surrounded by sea that formed a natural barrier but in 1400 BC the Greeks attacked Knossos destroyed it, took all the treasures, artist and craftsmen and the story of Greek culture continued on the ruins of Crete. Painting was mural decoration the subject matter was Cretan life, bull fighting, processions and ceremonies also some scenes from nature including birds, animals, flowers, fish and sea life. There are big frescos with figures of Athletes. Both men and women had slim waists and as in Egypt male figures are painted red and the female figures yellow.

'The cupbearer' is full of life and seems keenly conscious of the pride of his race and the mobility of the ceremony that he is performing. Some figures are in low relief with flat tones, frescoes are miniature in which there are crowds attending ceremonies over large washes of red indicating men, and heads are outlined in black with white collars and white eyes. In the background below are ladies with entire figures painted in detail. Their dresses are bright and the effect of conversation is highlighted by the gestures of the hands.

At Knossos in the south verandah there is a big procession of youth and maidens led by the King in glorious robes with a crown of peacock features. One unusual painting of a boy has also been found whose flesh has been colored in blue picking flowers of different colors and putting them into a vase. 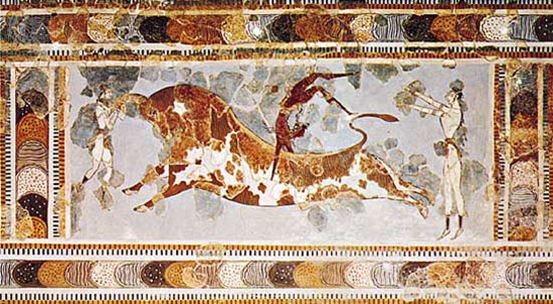 The ‘Toreadore” i.e.bull fighting scene shows a dramatic movement and the curves are long and sweeping in the body of the bull. 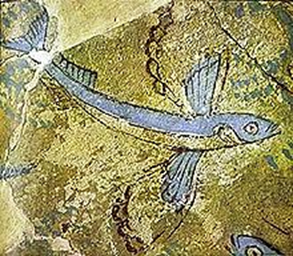 In the ‘flying fish fresco’ the impression is of an easy swinging movement and counter movement. The impressions of Blues, yellows and browns are happily distributed over a flat surface.